Parts of this article are now outdated

With updates, some of the things written below do not reflect the reality today, WSL2 is now pretty good, Windows Terminal even got a quake mode, and I moved my workflow to docker.

Working with lots of servers I became quite attached to working with a shell, but I'm stuck using Windows because of the Adobe suite, the Stream Deck I use for macros, and other proprietary software that I don't have an alternative for.

I decided to try out WSL to fill my needs, it worked fine for a bit, having integration with Docker in WSL2 was a big step up from WSL1 but the limitations started to show up sooner than I expected. WSL2 is great for giving you a taste of Linux on Windows, but the following problems made me go back to the drawing board:

So I decided to try something else in order to keep my ability to run VMs with Vagrant without sacrificing much of the Linux experience I got on WSL. 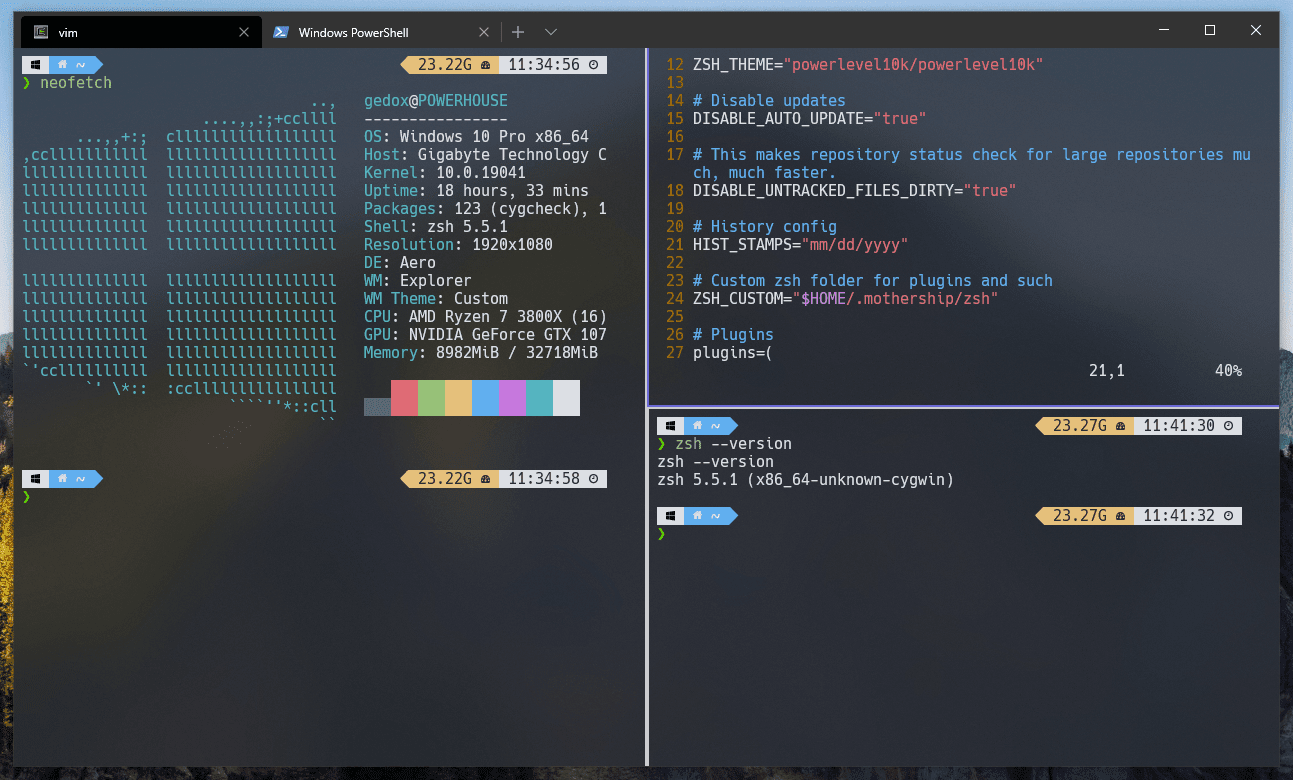 What I wanted to achieve with this setup:

It's a fancy terminal emulator built by Microsoft, it's open-source under the MIT license. I'm quite happy with it, has support for tabs, unicode characters, theming and styling, window splitting and probably more things, but I didn't bother to go much deeper yet. GitHub Repository

Installing Windows Terminal is as easy as opening the Windows Store, searching for Windows Terminal and installing it. You can also get the source from GitHub and compile it yourself, or use a package manager like winget or Chocolatey.

Once you have Windows Terminal installed, open it and play around for a bit, you should find the "Settings" panel or you can hit CTRL+, to open it. A JSON file should open in your editor of choice automatically.

I suggest visiting the Microsoft documentation here about the various properties this file has to offer in order to fully understand how to take advantage of all the features.

I plan on uploading all my dotfiles regarding this setup on GitHub but for now this is how I customized my terminal: The font I'm using is called "Hack Nerd Font" and can be downloaded at Nerd Fonts.

Go to the Gygwin website, download it and do a fresh install, it's pretty straight forward, on the package list screen make sure wget is marked for install, we'll need it on the next step. 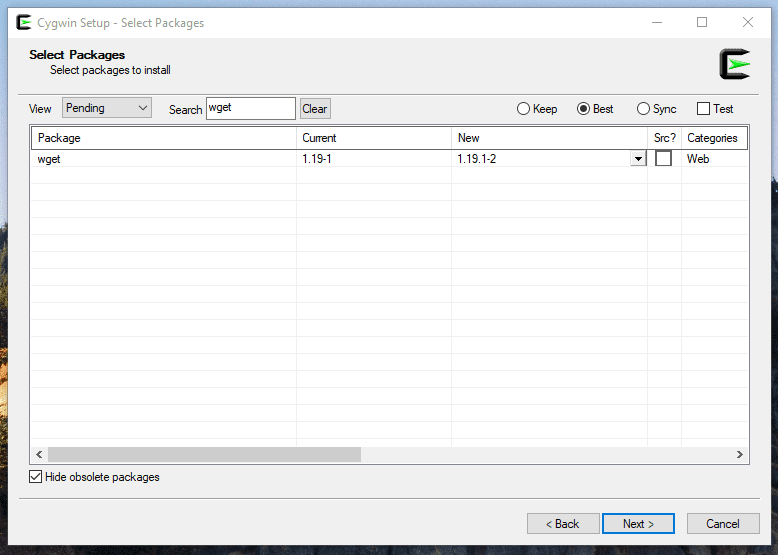 Let's say we want to install ansible, git and vim, currently we'd have to run the installer again and go trough the whole process again until we get to the packages selection screen where we have to search trough all of the versions ... do you see the problem?

I come from linux distributions such as CentOS and Ubuntu where all of this can be done with a simple sudo apt install -y ansible git vim and be done with it.

Fear not, apt-cyg comes to rescue. What is apt-cyg? It's a package manager for Cygwin, here's how to install it in two simple commands:

That's all, now you can simply do apt-cyg install <package name> to install a package, go to the package's GitHub Repository to see all the commands or run apt-cyg help.

Now we want to be able to open the Windows Terminal and have one of the shells installed trough Cygwin open automatically and be usable, also we want to have a context menu entry in Windows to launch our shell in the current directory.

Open your settings file by opening the Windows Terminal and pressing CTRL+, and look for the list of profiles, create a new one, it should look like this:

The guid has to be unique in the list of profiles, it's used to identify the profile and also used to set the default profile to open when you launch the terminal.

The commandline is where all the magic happens, %HOMEDRIVE% is a Windows environment variable, it's set to the drive letter of the current windows install location, in my case that's C because that's where I've installed Cygwin, you can just specify the drive letter instead. And don't worry about zsh you can replace that with bash if you'd like, I just like zsh better.

The command goes something like this: Launch C:\cygwin64\bin\zsh.exe and execute this command cd $OLDPWD; exec /bin/zsh as a logged shell, this will change directory to $OLDPWD which is an environment variable set by windows terminal with the directory it's been opened in, and then execute the zsh shell in that directory. I know it's a bit hard to understand but it's needed for the context menu integration to work properly.

The startingDirectory just changes our terminal to open in our user's directory inside of Cygwin's install directory, by default the Windows Terminal doesn't know how to handle Cygwin's virtual filesystem and defaults to System32 which is not really a place you want to be most of the time.

What that means? Open a directory in Windows and right click inside that directory, you see that menu? That's the context menu. We want to have an entry there that allows us to launch the Windows Terminal in that directory.

To do this start by creating a cygwin-integration.reg file somewhere and open it with a text editor. Next, grab this code and paste it in there, but make sure to READ IT, don't go around executing code that you don't trust or don't know what it does, so read it and try to understand what it does.

This one will create 3 new registry entries in the context menus for a directory, a directory's background, and a drive.

Also one more thing, MODIFY the <user> with your Windows user folder name and please go to the path listed in these commands and make sure wt.exe exists at that path, otherwise your menu entry won't work.

Now save the file and double click on it to install the entries in your registry. Now you can test your new menu entry by opening a directory or even right clicking on your desktop and clicking on the Open Windows Terminal here entry, it should do what it says.

If you somehow mess it up just open the file again, update it and execute it again.

If you're happy with what you have so far and prefer Bash over ZSH then you can skip the rest of the article, it goes into ZSH, customization, plugins and powerline.

From now on I'll assume that you're somewhat familiar with what ZSH is and how to configure it on a basic level so I won't go over the basics.

It's as simple as running apt-cyg install zsh, you'll see a zsh.exe in your /bin directory and typing zsh should launch you directly into your new shell. Don't get too attached to it because we're going to change it a bit.

What's this? It's essentially a framework to manage your ZSH shell, it allows you to add plugins, modularize your shell config and some really advanced theming.

You can grab it from their GitHub Repository, install it and run trough the setup. Follow the readme on the page, it does a much better job at explaining what to do than I will ever do, or ever have the energy to do it.

This the last stop, one of the fancies and most complex themes for ZSH so if you're perfectly happy with your setup you can safely skip it.

But if you really want to give it a try and get lost for a few hours customizing every little detail of your shell, go to their GitHub Repository and follow the steps for Oh My Zsh.

I'll let you set up the theme because everyone's taste is different and having your own personal touch in the terminal is part of the pleasure.

For fonts you can use Nerd Fonts and remember that to change your font, you have to edit the Windows Terminal configuration.

I don't know if you've already found out but you can call windows programs directly from the terminal, for example cd into a directory and run explorer.exe ., it'll open the directory in the Windows file manager.

Neat, right? That's why I set an alias for that like so:

Now when I type explore it'll open the current directory in explorer. Play around and build your own aliases to ease your workflow.